The CONNECT Valenciaport Action pursues the objective to improve Valenciaport’s accessibility by upgrading its rail infrastructure and under this framework, the action is divided in fifteen activities gathered into five different groups.

In this regard, the first action concerns a single activity in the Levante Quay. The second group of activities are located in the Principe Felipe Quay and correspond from the activity number two up to activity number five. Thirdly, activities six to nine are grouped to compose the third main action of the project, corresponding to the improvement of the internal rail network. The activities from ten to twelve are related to the new TIC systems of the port-rail operations. Finally, the last group of activities (thirteen to fifteen) serve as transversal tools to assure the proper follow up and execution of the action. 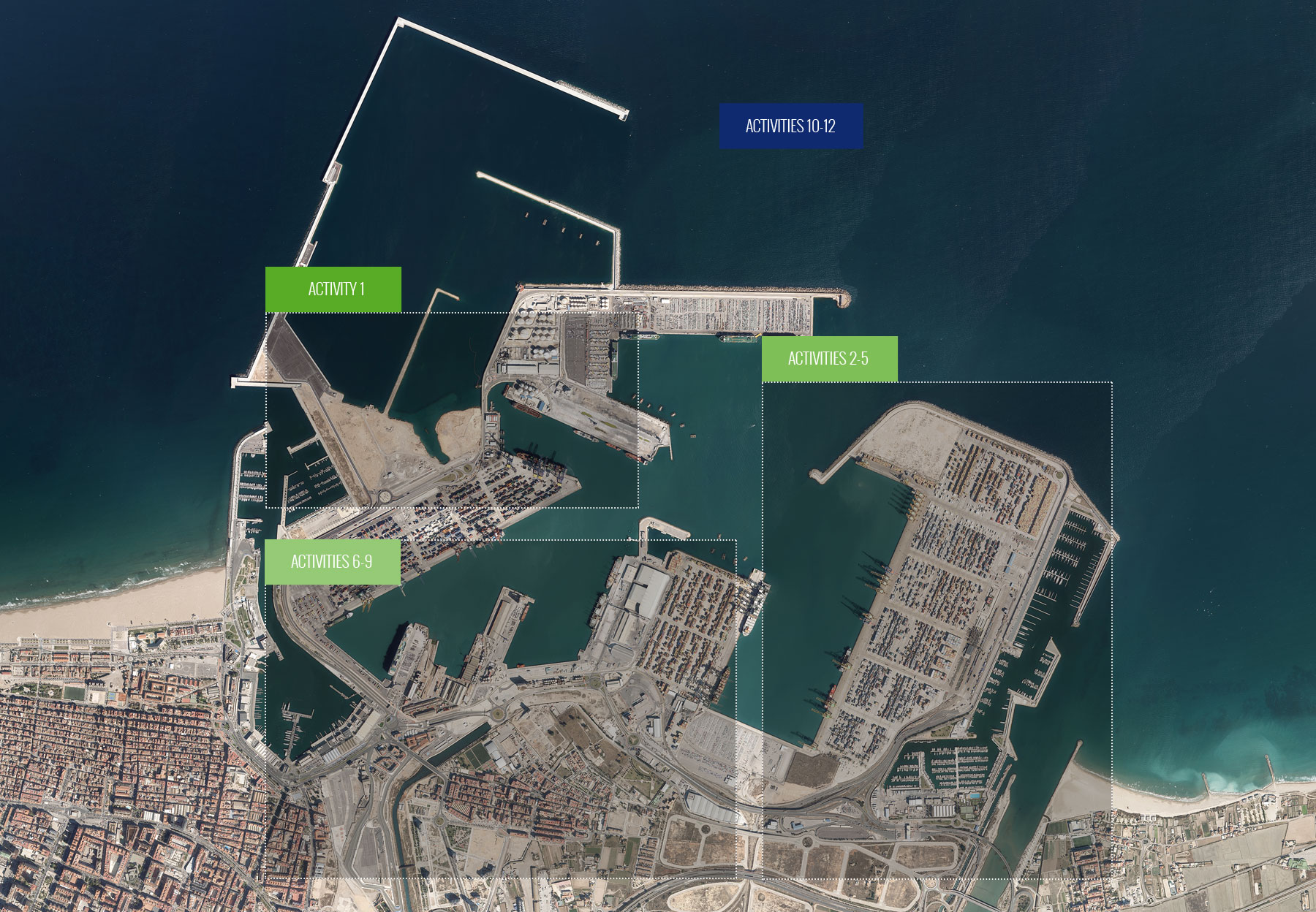 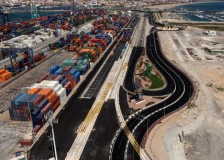 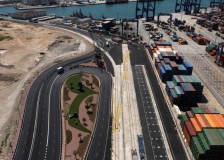 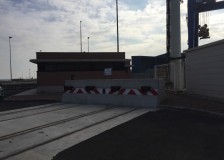 Activity 1 consists of the necessary works for the lengthening of the railway tracks in order to allow trains up to 750 m long to be operated at the container terminal of Levante Quay. The design study of the works was completed before the global action started and is not part of Activity 1.

The new extensions of the general rail track (202 m) and one of the load/unload rail tracks (from 330 m to 799 m) will be implemented with dual gauge (Iberian and UIC).

The modification of the rail tracks layout affects the adjacent road network, specially a roundabout located next to the terminal. Therefore, this road network will be reshaped. In addition, in order to optimize the operations of the terminal, two reinforced beams will be implemented alongside the loading/unloading rail tracks enabling the use Rubber Tired Gantry Cranes (RTGs) instead of Reachstackers during the operations. 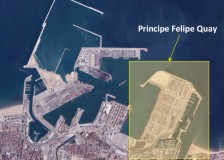 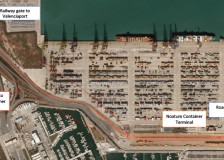 Similarly to Activity 1, the present and future increase of rail transport use urges the need to adapt Valencia’s Port infrastructures. Among them, the public rail terminals should be adapted to the technical requirements in order to improve interoperability. Activities 2 to 5 will allow the use of 750 metre trains and UIC gauge in the public container terminal of Principe Felipe Quay and also include the electrification of rail tracks.

In particular, the activity consists of a detailed engineering design study for the remodelling of the railways in Muelle Principe Felipe. This study is necessary as it will define the details of the infrastructure works to be carried out in the Activities 3, 4 and 5.

ACTIVITY 3: Relocation of the terminal gates and access to the new gates of the public container terminal of Principe Felipe Quay

In order to lengthen the rail tracks of the terminal it will be necessary to previously move the road network gates that allow the access to Noatum Container Terminal Valencia. Firstly, new gates will be installed at the east side of the container terminal yard in an area that is now dedicated to Ro-Ro traffic. The new terminal gates will include eight entry lanes and five exit lanes and will occupy an approximate area of 1.4 ha. Finally, the old gates will be demolished to dedicate the area to the rail track lengthening.

The new rail terminal layout consists mainly in the upgrading of the existing five railway tracks: the general rail track connected to the port rail network and four operating tracks for loading/unloading operations. The existing general rail track and two operating tracks will be adapted to dual gauge and their length will be increased (from 626 m, 629 m and 614 m) up to 933 m, 895m and 895 m respectively. The length of the two other operating rail tracks (Iberian gauge) will be increased (from 617 m and 601 m) up to 905 metres each.

This Activity will also increase the versatility of terminal operations. Two new headshunts with dual gauge to release locomotives (with 66 m and 101 m long respectively) will be constructed.

The works include the extension of the current electrification (3000 V of direct current) and its adaptation to dual gauge to the connection between the general rail track and the head of the loading/unloading tracks, together with the electrification of the two new headshunts.

Finally, this activity also includes the upgrade to dual gauge and the required adaptation of the electrification system of the existing connection (approximately 1,500 m) up to the entrance gate of the port.

ACTIVITY 5: Restoration of the storage area in the Public Terminal of Principe Felipe Quay

The works described in Activity 4, specifically lengthening of the rail tracks, will require the use of land currently used as a storage area inside the container terminal. Therefore, the storage capacity of the terminal has to be restored by the proper conditioning of approximately 5.3 ha of currently unused land, by paving this area according to the specifications of the terminal area. 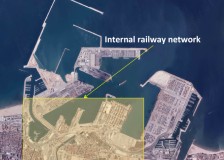 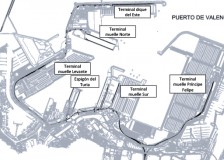 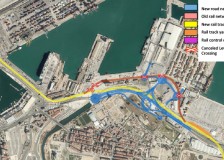 ACTIVITY 6: Design study of a new railway layout and network

As stated in Activities 1 to 5, the increase of rail traffic will require the adaptation of the inner railway network of the Port of Valencia in order to increase the interoperability of the infrastructure and to upgrade the direct access of trains from/to the Mediterranean Corridor. Apart from the activities related to the rail tracks located in the main public container terminals, it is also necessary to adapt and upgrade the rest of the rail infrastructure of the Port of Valencia, provide rail access to these terminals and build a rail control centre and a general port shunting area providing support for traffic management, train reception/expedition and other shunting operations.

This Activity in particular, will carry out the detailed engineering design study of the new railway layout and network. This technical project is necessary as it will define the details of the infrastructure works to be carried out in Activities 7, 8 and 9.

Approximately 1,000 m of new railway tracks will be constructed from the external network connection to the Costa Quay of the Port of Valencia, replacing a section of the current rail network which includes five level crossings. The new layout includes a shunting area (approximately 600m long) near the beginning of the internal network which includes three rail tracks in dual gauge and two in Iberian gauge. This general port shunting area is a set of railway tracks in the port area designed and used as a complementary infrastructure for the following operations: Train reception and expedition; parking of rolling stock and shunting operations (e.g. classification of wagons, wagons coupling and decoupling).

From the end of the shunting area to the Costa Quay, the network will consist of two rail tracks, in dual gauge.

The adjacent road network is significantly affected by the new railway layout and will be consequently reshaped in the scope of the Activity. The new layout will not include any level crossing and therefore it will be safer and will improve rail mobility inside the port.

ACTIVITY 9: Electrification and connection with UIC gauge from Costa Quay to Levante Quay

In order to complete the upgrading of the internal rail network and accomplish its full interconnectivity to the Mediterranean Corridor, the general rail track (approximately 3,700 m) in the section from the Costa Quay (the previous section has been upgraded in the Activity 8) to the public terminal in the Levante Quay (upgraded in Activity 1) will be adapted to dual gauge.

In addition, the general railway line will be electrified from the port entrance to the East Breakwater Quay (approximately 6,000 m). The railway electrification system will be (3000 V of direct current) in order to be interoperable with the national railway network.

This Activity will focus on the additional communication functionalities that are required in valenciaportpcs.net in order to adapt the system to rail transport operations. New communication services will be developed for the exchange of information between the Port Authority and railway undertakings and operators for railway capacity assignment and railway traffic operation and control. Besides, a completely automated paperless customs release process for trains will be developed, which will require software development together with the installation of new hardware (e.g. gantries with cameras and recognition systems).

The objective of this Activity is to improve the efficiency of the traffic management system for the Railway infrastructure of the Port.

The Port Management Information System (PMIS) currently used, which is called OPERA need to be adapted to improve efficiency and make possible a less administrative cumbersome of rail transport services.

In order to adapt OPERA to include rail transport operations (OPERA train pack), the following modules will be implemented:

The objective of this Activity is to define a new software module to operate with trains based on new electronic data interchanges (EDI) formats requires to adapt not only EDI client/servers but also the terminal operating system and its database.

This Activity consists of the re-designing of the main CATOS software programme modules to meet the requirements of rail transport operations in the public Noatum Container Terminal Valencia.

The following modules are expected to be adapted and/or re-designed: